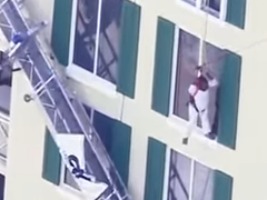 An American worker is glad to be back on firm ground after he was left dangling from the 12th floor of a Florida building last month.

The man was working on the outside of the building when the scaffold he was standing on collapsed on one side after a motor malfunction. Thankfully, a deadly fall was prevented by the worker’s fall arrest system. Held up by his harness, the worker managed to rest his foot on the ledge of a window until help arrived.

The special response team from the City of Miami also made use of harness equipment to assess the situation and carry out a rescue. The team worked for about an hour, strapping the worker up while fellow rescuers spoke to him from an adjacent balcony.

Speaking of the worker, a Miami Fire Rescue official said: “He was stable. He was constantly communicating with us, and we were able to establish a great rapport and maintain him while he was calm.”

After his terrifying ordeal, the man was transported to Jackson Memorial Hospital. Aside from dehydration, he suffered no major injuries.

It was reported that the Occupational Safety and Health Administration (OSHA), America’s equivalent to the Health and Safety Executive (HSE), had been informed and would be investigating. With recent reports of President Trump’s campaign of deregulation and attempts to silence OSHA, we hope this incident is given the attention it deserves. The work of investigatory bodies not only incentivises compliance but also provides opportunities for industries to learn from mistakes.

The story is an obvious example of the paramount importance of personal fall arrest systems. However, while some technical malfunctions may be unavoidable, the story also reminds us of the need for stringent testing and checks on work at height platforms to keep our workers safe.

How’s your height safety equipment holding up? From working platforms, to access and anchorage, we’ve got your compliant height safety solution covered.